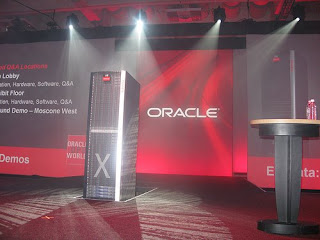 Two years after the moment that Oracle went into Operating Systems - Unbreakable Linux - today Larry announced that Oracle (partnering with HP) will sell hardware also. And it's not a simple commodity server... It's the HP Oracle Database Machine. This beast contains 8 database servers (with 64 cores in total) and 14 eXadata servers (with 112 cores). And an enormous amount of storage: 1400 times more than the largest iPod! I think it could contain all mp3's in the world...
An eXadata Server (officially known as the HP Oracle Exadata Programmable Storage Server) contains 2 processors with 8 cores each, 12 disks, Enterprise Linux and - and this is the coolest part - Parallel Query processing capability for every disk. By bringing processing capability close to the storage, the amount of data going through the wires from a storage server to a database server is dramatically reduced - because results are passed instead of datablocks. Because of this architecure the performance will remain the same as the database is growing - just add some more servers and it will be fine. So this is the last piece of the grid-puzzle: Next to Fusion Middleware grid and Database Grid, Oracle can provide us now with Storage Grid.
The performance of this thing is gigantic: tests proved that queries will run 10 to 50 (!) times faster than on current available hardware.
And now ofcourse the closing question: What does it cost?
A Database Machine costs $650,000 - which is $4,000 per terabyte, and that is much cheaper than other storage around. Apart from that there is 'some' license involved for the software : $1,680,000 (and surely an annual fee of 15% of that amount). So it's not for free...but it can replace a room full of yout current hardware!