By Roel July 03, 2017
For pushing changes from the database to the end user, the regular solution is using websockets. A change in a record is detected - using a trigger or using the CQN (Change Query Notification) feature - and a notification is send to a websocket server. That websocket server broadcasts the notification over a channel to all browsers that are tuned in to that websocket channel. Then the browser reacts to that notification, usually showing an alert or refreshing a report. This trick is described on multiple sites, just Google for "oracle apex websockets" or similar.

So back in the old days, we used that notification in the browser to refresh the (interactive) report. But along comes the Interactive Grid (IG). While he full-refresh mechanism still works for IG, an IG has also the option to refresh just one row. 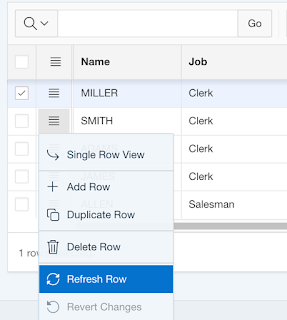 So wouldn't it be awesome that just the changed row(s) get refreshed upon a change in the database, instead of the whole report? Can we do it ... yes we can!

First in our "Execute when Page Loads" property we start listening to the websocket server when the page is loaded using:

In the "Function and Global Variable Declaration" we add the actual code and the init function:

The key of the code above is that the records that are changed and are found on the current page are added to an array of records. And that array us used to fetch the records. If you inspect the network traffic that is going on, you can verify that only the changed records (in the screen shot below, three changed records) are fetched and shown on the screen.

The whole process works seamless for the user. If he made a change to a record that didn't get updated by someone else (or another process) than he can keep working on that, if he did make a change - and thus there is a conflict - he will get a notification. In our example the process didn't even show a progress spinner, but maybe that's because our queries are fast (it is not on EMP, but based on a view that references several tables and returns over 40,000 rows).

[Edit Jul 4 : I changed the code in a way that it is dependent on the DOM anymore, but only uses the model to determine whether there is a record to update]]

By Roel February 05, 2018
If you created your own "updatable reports" or your custom version of tabular forms in Oracle Application Express, you'll end up with a query that looks similar to this one:
then you disable the "Escape special characters" property and the result is an updatable multirecord form.
That was easy, right? But now we need to process the changes in the Ename column when the form is submitted, but only if the checkbox is checked. All the columns are submitted as separated arrays, named apex_application.g_f0x - where the "x" is the value of the "p_idx" parameter you specified in the apex_item calls. So we have apex_application.g_f01, g_f02 and g_f03. But then you discover APEX has the oddity that the "checkbox" array only contains values for the checked rows. Thus if you just check "Jones", the length of g_f02 is 1 and it contains only the empno of Jones - while the other two arrays will contain all (14) rows. So for processing y…
Post a Comment
Read more