By Unknown August 12, 2016
In APEX you can define a web service that returns XML as below - all declarative, just a few steps through a wizard. 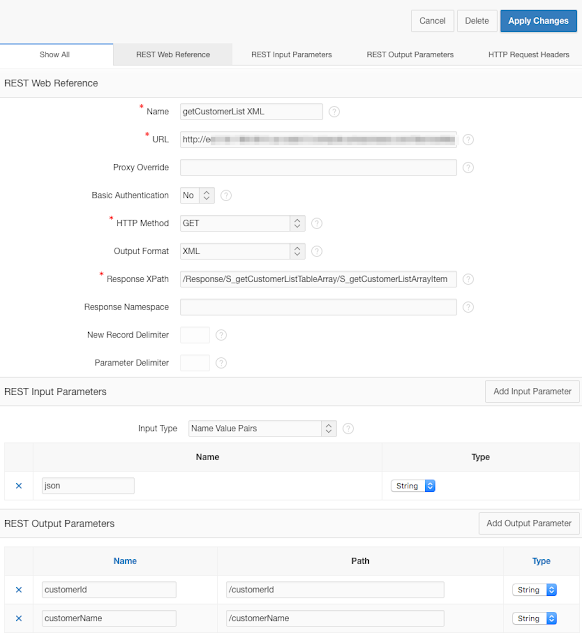 Then generate a report on top of that web service - again just a few clicks through a wizard. The generated query looks like this:

So the result of the web service is stored in an XMLTYPE column. And it's easy to spot where you're definitions for the Response XPath and Output Parameters are used.

But what if your web service returns JSON - as more and more web services will do so? If you switch the Output Format of the web service definition to JSON, the Response XPath property and the Output Parameters are not enterable. And if you generate a report on top of that web service, the resulting query is a - disappointing -

and your report will show a JSON dump. Not exactly what you're hoping for. And notice the result is stored in a CLOB.

But since 12c, the JSON support in the Oracle database has improved a lot and we can easily use that in our query. So if we rewrite our query to

we will get the same result as the - old fashioned - XML one! And as you can see the code is very much alike and could be generated by APEX itself just like the XML version.

So I expect that in a future version this functionality will be added to the APEX builder - it shouldn't be that hard to implement! And maybe the apex_collections can have a real "JSON" column as well (in fact it would still be a CLOB with an "IS JSON" check).

The only prerequisite is, you have to run APEX on version 12c of the database. If you want to know more about JSON in the database, there is a serie of blog posts about this, starting here.

By Roel February 07, 2021
If you run your APEX application - like a Form based on the EMP table - and test if you can change the value of Department to something else then the standard values of 10, 20, 30 or 40, you'll get a nice error message like this: But it isn't really nice, is it? So what do a lot of developers do? They create a validation (just) in order to show a nicer, better worded, error message like "This is not a valid department".  And what you then just did is writing code twice : Once in the database as a (foreign key) check constraint and once as a sql statement in your validation. And we all know : writing code twice is usually not a good idea - and executing the same query twice is not enhancing your performance! So how can we transform that ugly error message into something nice? By combining two APEX features: the Error Handling Function and the Text Messages! Start with copying the example of an Error Handling Function from the APEX documentation. Create this function
Post a Comment
Read more

By Roel February 05, 2018
If you created your own "updatable reports" or your custom version of tabular forms in Oracle Application Express, you'll end up with a query that looks similar to this one: then you disable the " Escape special characters " property and the result is an updatable multirecord form. That was easy, right? But now we need to process the changes in the Ename column when the form is submitted, but only if the checkbox is checked. All the columns are submitted as separated arrays, named apex_application.g_f0x - where the "x" is the value of the "p_idx" parameter you specified in the apex_item calls. So we have apex_application.g_f01, g_f02 and g_f03. But then you discover APEX has the oddity that the "checkbox" array only contains values for the checked rows. Thus if you just check "Jones", the length of g_f02 is 1 and it contains only the empno of Jones - while the other two arrays will contain all (14) rows. So for
Post a Comment
Read more