By Roel November 02, 2006
For me OOW started on Sunday morning with the ODTUG Oracle Developer Suite Special Interest Group Meeting in the Hilton. In this session 2 Oracle Emps of the Forms and Designer Development Depts answered questions of the audience.


Of course no time frame for the release has been given.

At 6:00 pm Charles Phillips had the honour of kicking of OOW with the Opening Keynote. Charles announced that the Oakland Arena will be renamed to Oracle Arena (according to the basket and ball, it had something to do with basketball....). After that Charles emphasized that all Applications (EBS, JD Edwards, Peoplesoft etc), will be supported and extended "unlimited", next to Fusion. Then he announced - and even live demo'ed! - Oracle Accelerate, a tool to simplify the setup for your Oracle Apps instance, just by answering a few questions. 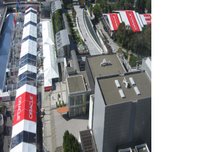 At 7:00 the first party of OOW started: The Welcome Reception in the tents on Howard Street.