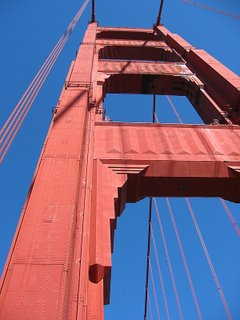 Back in the office it’s hard to imagine that it was only a week ago that I was in San Francisco for the “greatest Oracle show on earth”. So many people (over 40,000), such huge session rooms at the Moscone (at least 200 attendees could fit in), 7 really big screens in the keynote arena with impressive audio visual performances…etc, etc. Golden Gate Bridge And every hour these 40,000 people moved their way from one room to another - as if you would evacuate a small city! And still they managed to feed all these attendees without creating long waiting lines. What a great logistic performance. Especially when about 25,000 people where moved to and from the Cow Palace on Tuesday night to watch Sir Elton J.

Alas there were a few drawbacks. The most irritating thing was that a lot of people were so important (at least that’s what they were thinking), that during sessions they kept their cell phones on with really loud ringtones. And even dared to pick up the phone when it rang and talked out loud! The second thing that stroke me was that people walked in and out the sessions rooms as they liked, not showing any respect to the presenter at all.

Apart from all Oracle stuff I had some time to explore SF: biked the bridge, saw the see lions at Pier 39, ride the cable car and visited Alcatraz.

All and all I had a great time in a great city and learned a lot about the future of Oracle (Fusion, SOA and more Fusion and SOA).

In the next blogs I will concentrate more on the contens of the sessions I attended.